At the time when most Europeans were content to build churches in their own Gothic style, Gaster deliberately sought inspiration from the local Sinhalese architecture. Prototypes for the Church are to be found at the Royal Audience Hall, Magul Maduwa (Celebration Hall), of the Kingdom of Kandy (built in 1783 by Sri Rajadhi Rajasinha) and the 14th century Embekka Devalaya Shrine near Kandy. The first example of the use of traditional architectural design in Christian churches, also involved both Rev. Fraser and Rev. Gaster was the chapel at the Peradeniya Training Colony, however similar to the Magul Maduwa and the Embekka Shrine the pillars of this chapel are made of wood.

The murals done by David Paynter on the walls of the Chapel are regarded as unique examples of Christian art in Asia, painted as they are on the bare surface of the granite walls. Local scenery and local models were used to depict biblical stories in order to give them an indigenous character and contemporary validity. Here was an effort to present Christ and Christian values in a local context when others would have been content to imitate styles and models from the West.

The lectern was installed in its present position in 1967. The work on the bell tower was started in 1965 and completed in 1969 and it was dedicated to the memory of Rev. John McCleod Campbell D.D who was principal of Trinity from 1924 to 1935 and in whose time the chapel was constructed and dedicated.

The creation of the stone pillars were supervised by Mr. K.L. Siripala, a famous stonemason of the time, to be shaped and carved. Other stone carvers were also brought to Sri Lanka especially for the purpose of carving the pillars for the chapel. The carvings on the windows of the side of the chapel were done by local craftsmen.

The fifty four pillars are made of granite quarried in Aruppola, 4 kilometres (2.5 mi) away. Some, in the chancel, are built in sections, but most have been hewn out of single blocks (5.5 metres (18 ft) long and 0.9 metres (3.0 ft) square), each of which weighing about 3 metric tons (3.0 t) before carving. The blocks were then hauled up to the college on a trolley by a pair of elephants. The first pillars to be erected, those by the pulpit and the south entrance, were fully carved at the quarry before being transported. The remainder were carved at the site of the chapel.

Each pillar is 4.9 metres (16 ft) in height and 0.6 metres (2.0 ft) square, they are square based and square capped, with a gently tapering stem, octagonal in shape.

The capitals on ten of the pillars facing the nave are carved with the coats of arms of those British schools and colleges, which made financial donations towards the cost of the chapel.

The pillars are surmounted by four pekadas, made of a tough local wood called Gummalu. Each pekada, designed by Mr Bezalel Navaratne, when viewed from below, has been carved to represent an inverted lotus. Many of the beams which the pillars support were also carved by local craftsman.

(Pekada (Sinhala: පේකඩ), or pekadaya, are the decorative wooden pillar heads/brackets at the top of a stone or wooden column (or a pilaster), known as kapa, supporting a beam or dandu. It is a unique feature of Kandyan architecture.)

In 1954 the original corrugated zinc roof sheets were replaced with calicut tiles, during the course of the re-roofing the murals above the pulpit and lectern are badly damaged. Paynter subsequently repainted these murals, completing the work in 1957.

The side chapel, entered from the north transept, was named by the then principal, Rev. McLeod Campbell as “the Chapel of the Light of the World”. It was the first part of the chapel to be completed and was formally dedicated on 23 March 1930.

Notice, as you enter, the intricate carving of the door frame; consisting of typical Kandyan work. The whole of the south wall of this chapel is covered with an early painting by David Paynter depicting the ‘Mother of James and John making a request to Jesus on behalf of her two sons.’

The chapel is rich in stone and wood carving. The screen and the grape and the chalice design on the altar were both made by local craftsman from the original drawings by Gaster.

The windows are typical Kandyan, the vertical bars are made of wood and painted with lacquer. The grill on the east was carved locally from a slab of Swedish green marble, like the grills on the sanctuary of the main chapel.

THE CARVINGS IN WOOD

The chapel contains many fine wood carvings, the work of local Sinhalese craftsmen recruited and directed by H.W. Mediwake.

On the pekadas: The basic design is the lotus, but the pine-apple is also to be seen at the North entrance, and the face of a lion (kibihi muhuna) near the South entrance.

On the screen and door of side chapel: Serapendiya, Scissors flower, lotus petals: jasmine flowers (pichcha mala) on the screen.

On the priests’ desks: Swan, peacock, elephant and lion.

On the lectern: note the jasmine pattern.

THE CARVINGS IN STONE

Many traditional Sinhalese floral and animal designs are to be seen carved in stone by Sinhalese and Tamil craftsmen.

On the capitals the lotus is the commonest design; at the West entrance it is to be seen with the cross superimposed. At the South entrance, notice the peacock; at the North entrance and in the side chapel, a swan, a lion and a flowering tree.

On the lower part of all the carved pillars, note the pineapple design.

Four of the pillars at the northern entrance carry carvings of the ‘four beasts’ of Revelation 4:7. From very early times these have been regarded as symbols of the four Gospel writers.

The pulpit was made in 1963 from Burmese teak. It carries the same jasmine pattern as lectern and screen and came from the workshop pf Mr. Paul Navaratne of Gunapane. It is a memorial to the Rev. W.S. Senior, Vice Principal of Trinity and author of the Hymn for Ceylon.

There is so much to be thankful to God for this Chapel and its builders and for the inspiration it provides to all those who worship here.

“Here lies the heart of the school, which continues to inspire those who go out from here to serve their fellowmen in the world at large.” 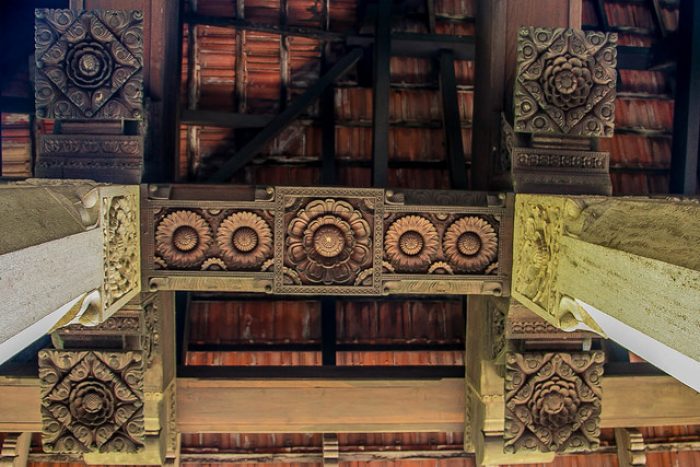 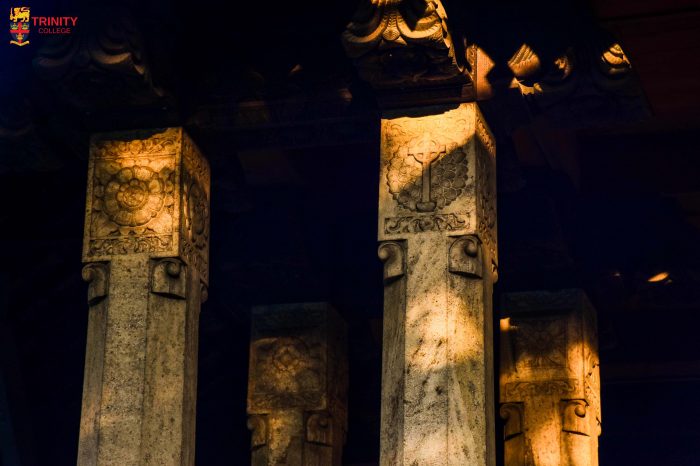 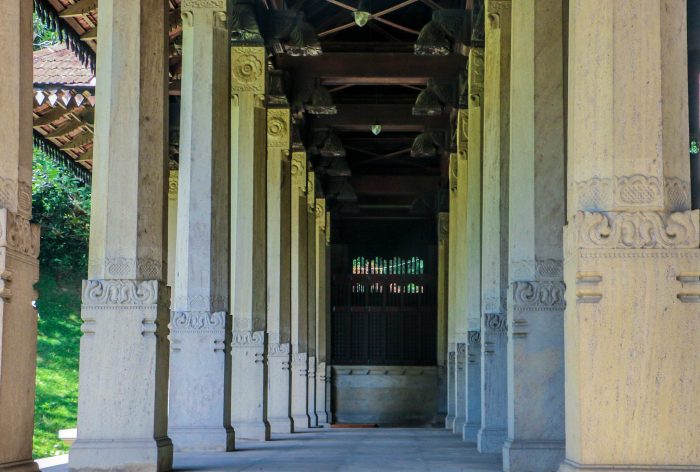 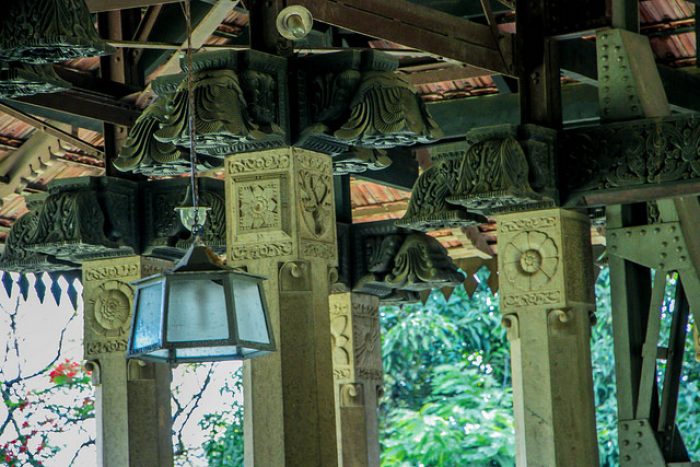