Wesley College Colombo was deprived of a well-earned victory in the season opener when they brought about a shocker at Lion Park Pallekelle against Trinity College but heart-wrenchingly lost the game 7-5.

Out of the total eighty minutes of game time, Wesley dominated almost 75 minutes of play giving the hosts Trinity College minimumopportunity restricting them to their own half. A revamped side under Jivan Goonetilleke, things seem to have worked effectively for the Double Blues. 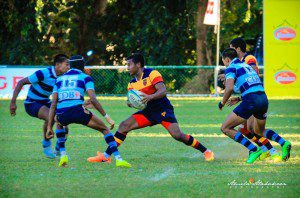 The game however was a let down from the very beginning as both teams felt the pressure of a season opener. From the kick off whistle, the game was an endless tale of continuous stoppages where the teams were found guilty of cardinal offenses.

Trinity’s inefficiency in ball handling gave Wesley College two early opportunities that was worthy of points but the Wesleyites opted to go for the bigger points by kicking for clearance. Vice-versa Trinity College were struggling to get through to their attacking third.

Thushila Perera had the early chance of drawing first blood for the season with an angled 34m penalty kick, but the effort proved in vain with the kick drifting to the left. Trinity was not clinical in their breakdowns and lacked execution as a team. The absence of their skipper Rahul Karunathilake who started from their bench this match would have been a reason but on the contrary, the Wesley skipper Zayan Sabah led his team from the front row whilst ex-captain Kutubdeen in his new position as second center commanded the backs. 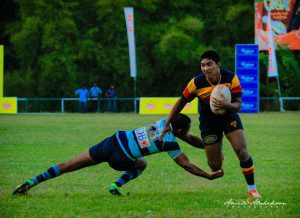 With a first half of disappointing rugby action, the second half proved out to be the deciding 40 minutes of play. The Double Blues were fortunate enough to earn themselves a kickable penalty only to see Murshid Zubair kicking through to the left side of the posts.

With the clock ticking through, the game went on to its final fifteen minutes without a score. With Wesley College moving in on their try line, they were gifted a 10m penalty. Working their way through a quick tap that was taken credit to Avishka Lee’s rapid reflexes; he saw the open space clearing up on the far left and passed it on to his very reliable Avantha Hashan. All what Hashan had to do was to sprint through a couple of defenders to the try line. This brought in the first try of the day in the 69th minute (5-0). Avishka Lee missed the important conversion but the try left Pallekelle in pin-drop silence.

With Trinity looking for their reply, found themselves inches behind the try line working themselves through their forwards. Trinity were lucky enough to receive three consecutive back to back penalties as referee penalized the Wesley line and it was finally through a hard fight that Nathan Yee crossed over for an all important try (5-5).

With all eyes glued on the conversion, it was Sanushka Abeywickrema who opted to take the angled 36m conversion and as the kick sailing through, the stands erupted with relief. Wesley didn’t have time by their side but a last minute effort by Avantha Samarawickrema on the open side would have got them the win but Diluksha Dange of Trinity canceled it out as referee blew for full time.

If one would need to judge a winner by the manner in which one played, it will definitely be the Zam Zam Zake; Wesley College who played their hearts out. They deserved to be taking home a win rattling the spirits of Pallekelle. Unfortunately to their dismay, they end up in the losing side. Regardless of the result, their performance today will give them the energy to come back stronger when the league resumes in a fortnight. 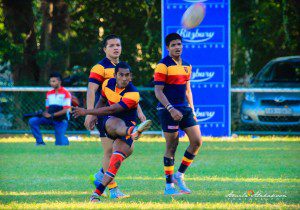 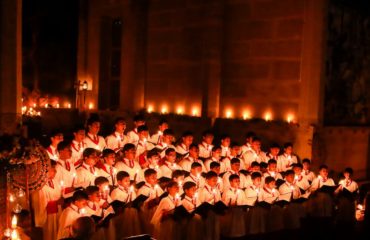