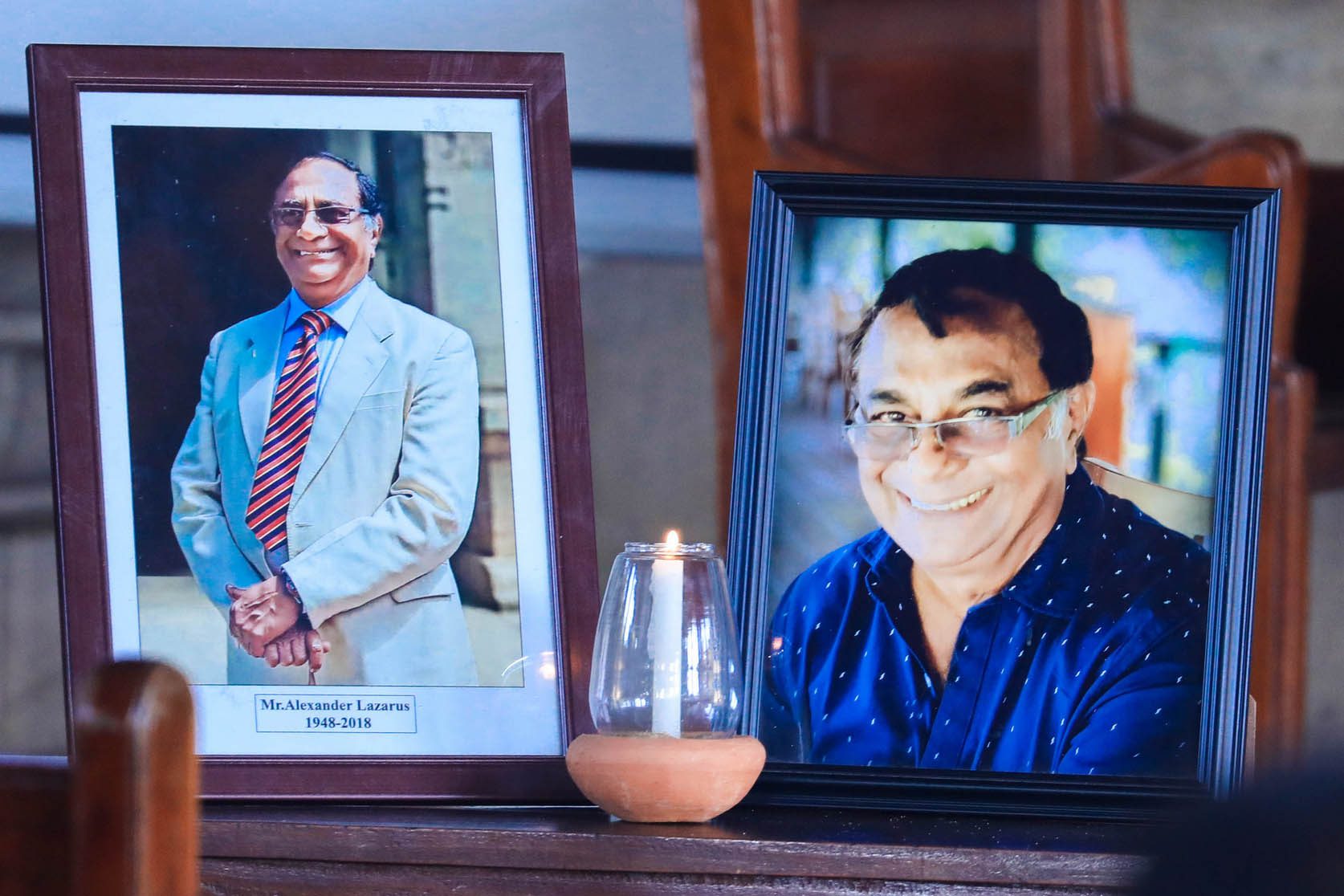 A Service of Thanksgiving for the life of Alex Lazarus

Trinity College Kandy has a reputation for producing remarkable individuals over the years, all of whom have contributed greatly to both the school and society as a whole. A man whose loss is still fresh in the memory of all Trinitians was perhaps the greatest contributor to his school, having spent almost all his life in service to his alma mater. His name was known to all, and loved by all. He was of course, Mr Alex Lazarus. 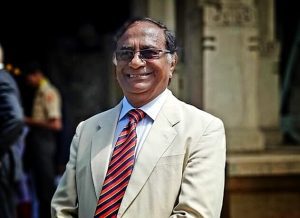 The 22nd of February was a day on which his life was celebrated with a thanksgiving service held in the College Chapel. It was attended by his family, friends, colleagues and his beloved students.

The service started with the first hymn, ‘Now thank we all our God’ being sung by the College Choir, followed by the introductory prayers by the Chaplain and a bible reading done by a Junior boarder. Then, a tribute was read by a senior boarding hosteller.

Mr Lazarus made a big impact in the lives of the boarders being the Ryde House master, and below we mention the tribute which was read by a hosteller at the service: 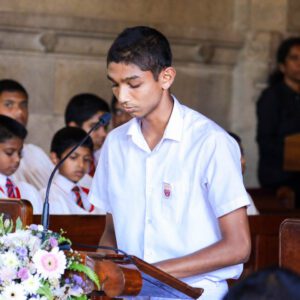 “As you all know, it has been four months since we lost our legend. They were the longest months in our hostel life. Ladies and gentlemen, Mr Alex Lazarus was a man who worked hard to direct us onto the correct path. He was not just a boarding house master. He was a father who loved us as his own sons, a brother who was always humorous and open minded with his youngsters, a teacher who guided his students, and a coach whose game plan was based on the ‘team spirit. He taught us how to be a complete man and how to face our day-to-day challenges. He wanted us to face challenges without him. We all loved and respected him a lot. It is still the same and it will be forever.

Whenever he was free, he used to give long lectures about him and Trinity’s golden days. Us boarders know how long his lectures were! Sometimes he used to come and sit on the front bed of the lower Ryde and watch how we play and show our mistakes. We will never forget his very own punishment, the ‘wewal kasaya’. As the senior hostellers, we had to face many challenges at the beginning of the year starting with the sports meet. Since none of us have done an event in the hostel without the assistance of Mr Lazarus, it was indeed a big challenge for us,  as ‘doing the best in the sports meet’ was always his target every year. We were always motivated by his popular advice, ‘believe in yourself’. However, we were able to become runners-up at the sports meet this year. During the past we had many accusing the Central Boarding House of cheating at the sports meet, but that’s all they could do as we had Mr Lazarus behind us every single second.

Even now, when I walk past the Ryde Lodge, I still feel his presence because he will always be in our hearts. Mr Lazarus was one of the few Trinitians who loved this sacred place called Trinity and a person who sacrificed his whole life for the betterment of the school. A minute is not enough to speak about Mr Lazarus, so I will end my tribute quoting the last two lines of the school song, ‘They were great days and jolly days, at the best school of all.’ May his soul rest in peace.” – Uvin Hasanka.

The second bible reading was done by a relative of Mr Lazarus after the second hymn, ‘Make me a channel of your peace’. The service continued with another tribute by a former classmate, the sermon by the Chaplain and the third hymn, ‘Through all the changing scenes of life’ being sung. 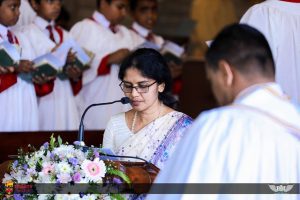 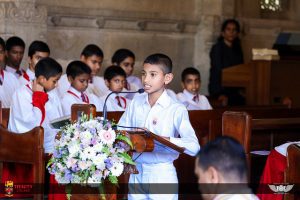 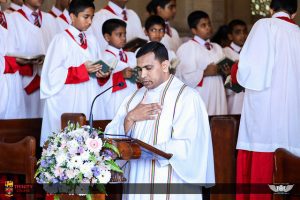 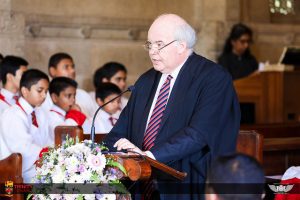 An appreciation was done by the Principal, Mr Andrew Fowler-Watt who read a poem called ‘Gone from my sight’ also known as the “Parable of Immortality”.

I am standing upon the seashore.
A ship at my side spreads her white sails to the morning breeze,
and starts for the blue ocean.
She is an object of beauty and strength,
and I stand and watch her until she hangs like a speck of white cloud
just where the sea and sky come down to mingle with each other.
Then someone at my side says: “There! She’s gone!”
Gone where? Gone from my sight – that is all.
She is just as large in mast and hull and spar as she was when she left my side,
and just as able to bear her load of living freight
to the place of her destination.
Her diminished size is in me, and not in her.

And just at the moment
when someone at my side says: “There! She’s gone!”
there are other eyes that are watching for her coming;
and other voices ready to take up the glad shout:
“There she comes!”

The service ended with a video clip produced by the students of the’ Central Boarding House in tribute to Mr. Lazarus.

Although the day was melancholy, as mentioned in the College Song, it was clear that the remembrance of Mr Lazarus brought comfort to all those who were touched by his brilliant life, and who miss him still. He was and will continue to be an example of all that Trinitians should strive to become.

“No, in all these things we are more than conquerors through him who loved us. For I am convinced that neither death nor life, neither angles nor demons, neither the present nor the future, nor any powers, neither height nor depth, nor anything else in all creation, will e able to separate us from the love of God that is in Christ Jesus our Lord.” 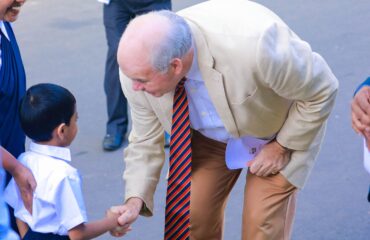 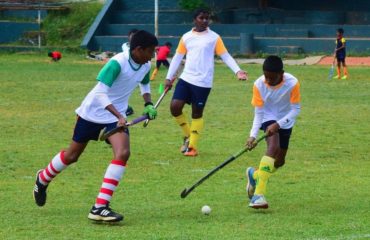