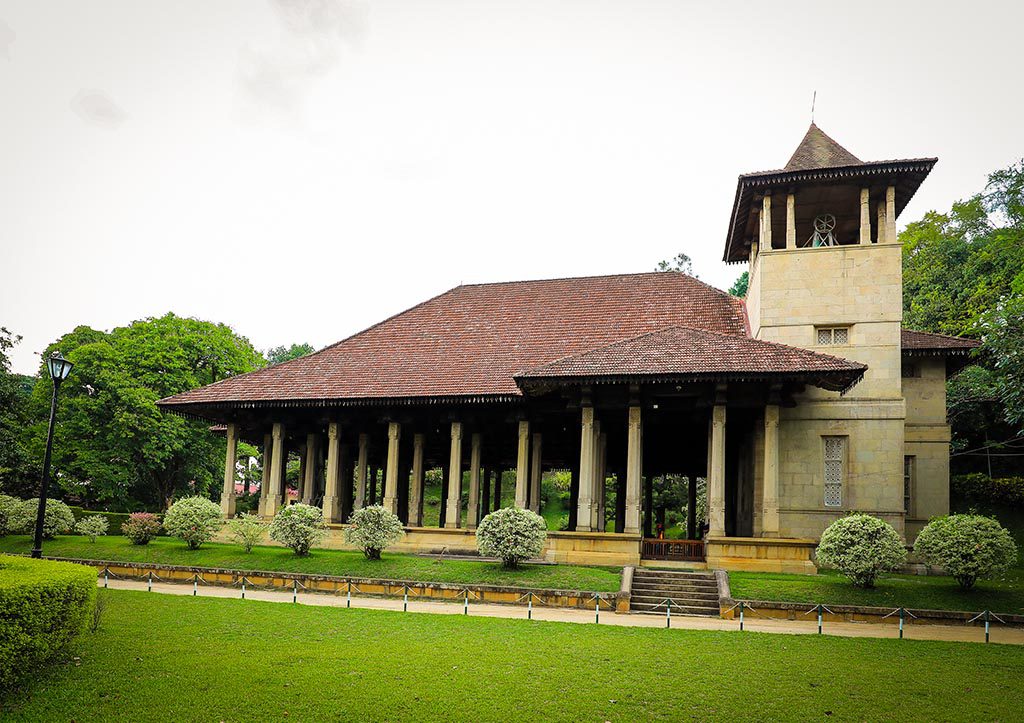 The John Mcleod Campbell tower and the 359 year old bell

“Having heard the ringing of the bell on the hill, to call the worshippers for communal service and to announce times of daily prayer”, it is a familiar timbre to those of us at college and is a reminder to where the heart of this institution prevails.

But what most of us both young and old would be unfamiliar with is the origins of The John Mcleod Campbell memorial tower which is sound to this day. In this article, you will learn how the bell tower of the Trinity College Chapel was constructed and how Trinity received a bell all the way from a church in Hemsby, England.

A bell tower usually sits atop a church, rising upward from its roof and the bell is rung to signify the time for worshippers to gather for a church service. In some churches it is rung three times a day – at 6 am, midday,  and 6 pm –  summoning the Christian faithful to recite the Lord’s Prayer, or the Angelus, a prayer recited in honour of the Incarnation of God. 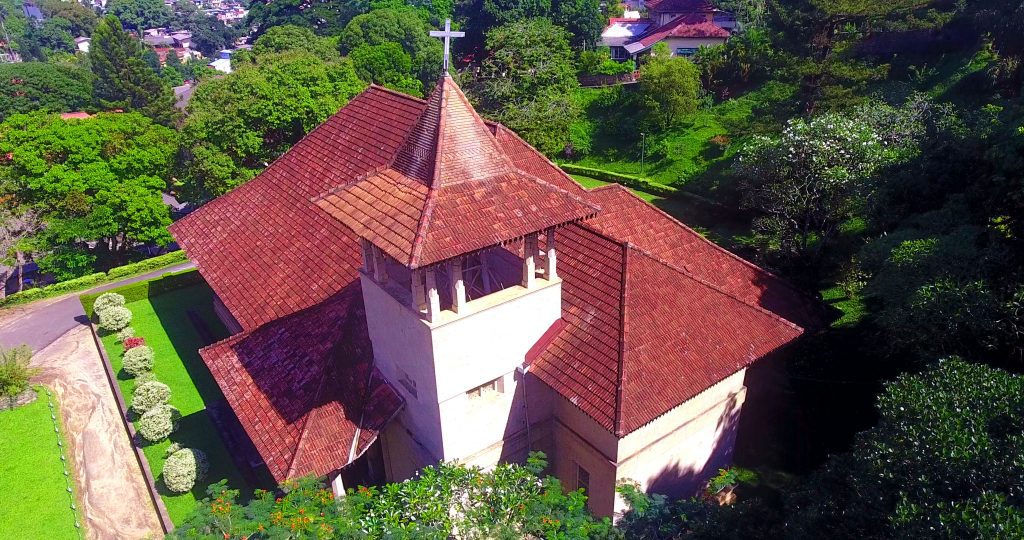 A drone capture of the Chapel from above

The Trinity College Chapel is fortunate to have a beautiful bell tower built upon granite blocks along with a bell which rings to the pitch of the musical note G# (415.305 Hz).

During the years the tower continued its slow growth and it continually added to the beauty of the Chapel, it was the last construction to be completed.  We have been fortunate to obtain slabs of marble for the grilles of the tower windows and the slow painstaking task of carving the grilles to the same design is remarkable (A task which took a skilled artisan four months for each grille). 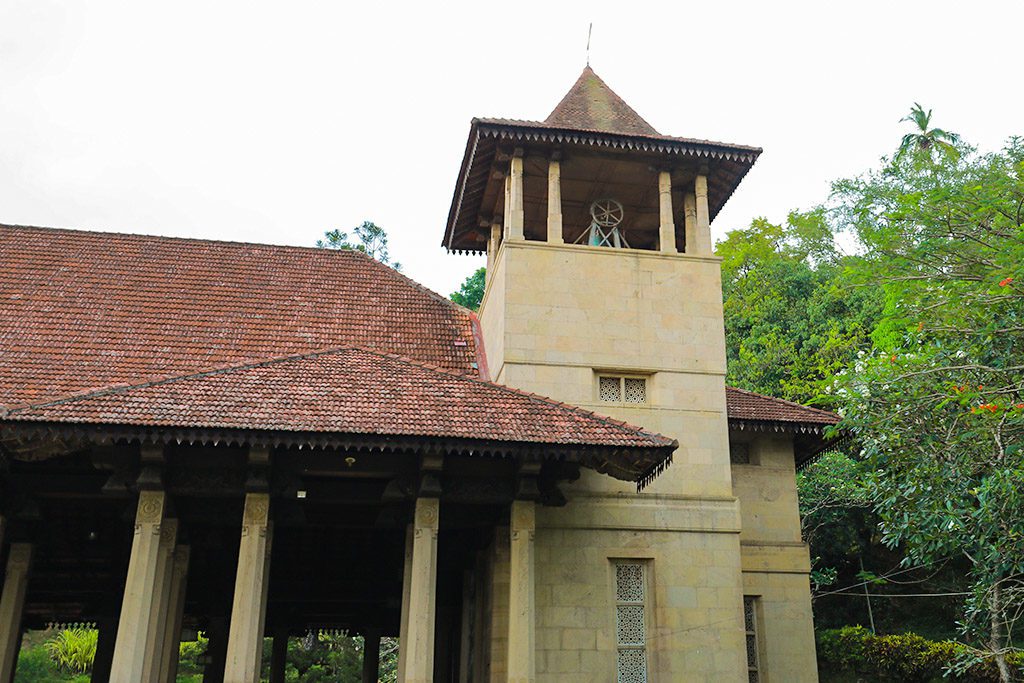 The tower is in three compartments, with the ground floor used as the vestry. The middle compartment is a storage space where spare lamps, roof tiles and other chapel accessories are kept. The topmost compartment is used for the bell,  fixed using four iron bars and a wheel fixed to a roller from which the bell hangs. A rope which drops down to the vestry is connected to the wheel.

Top of the tower is structured to an open view with 12 small granite pillars –  three standing on each of the four corners of the tower. It is interesting to note that the pillars aren’t carved. The ‘pekada‘ (lotus pendent bracket capitals of the Kandyan era) wood pieces fixed to each pillar are also not fully carved. The top of the tower gives a full majestic view of the Hanthana mountain range and Bahirawakanda area. The roof of the tower also includes a plywood ceiling. 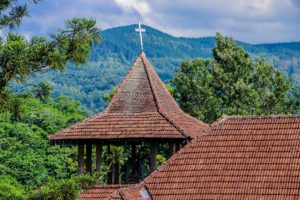 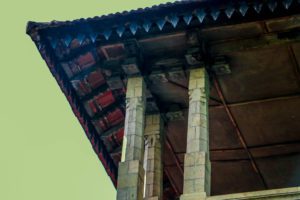 Granite pillars on top of the tower 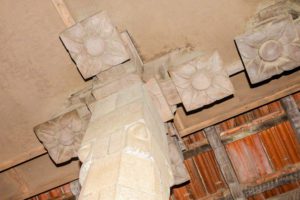 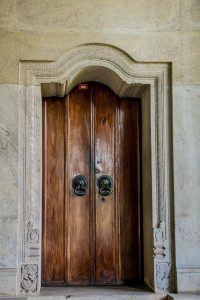 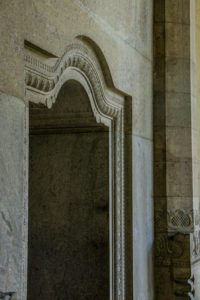 Carvings around the vestry door 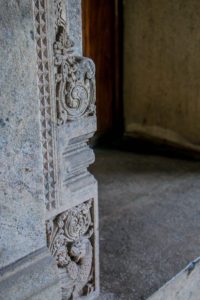 Carvings around the vestry door

The magnificent vestry doors are made of ‘gammalu‘, a timber used only for sacred buildings; this timber was gifted to us by Mr C. Darmaratnam, an old boy of the school. The door handles and the fittings were another gift from an anonymous donor who used the Chapel for worship. The stone around the vestry door has been adorned with magnificent stone carvings of the Kandyan era such as the carving of ‘Kesara Sinha‘ on the lowermost corners of the vestry door, and also the carvings of ‘Hansa‘ above it.

To all intents and purposes, the power and beauty of the lovely tower was ready to be offered to God, a poem in stone for God’s glory. The tower having being completed in 1970, for which Mr C. J. Oorloff was chiefly instrumental in building, was dedicated to Rev John Mcleod Campbell who was the Principal of College from 1924-1935 and is a prominent character in the history of Trinity.

The bell from a church in Hemsby, Norfolk, England 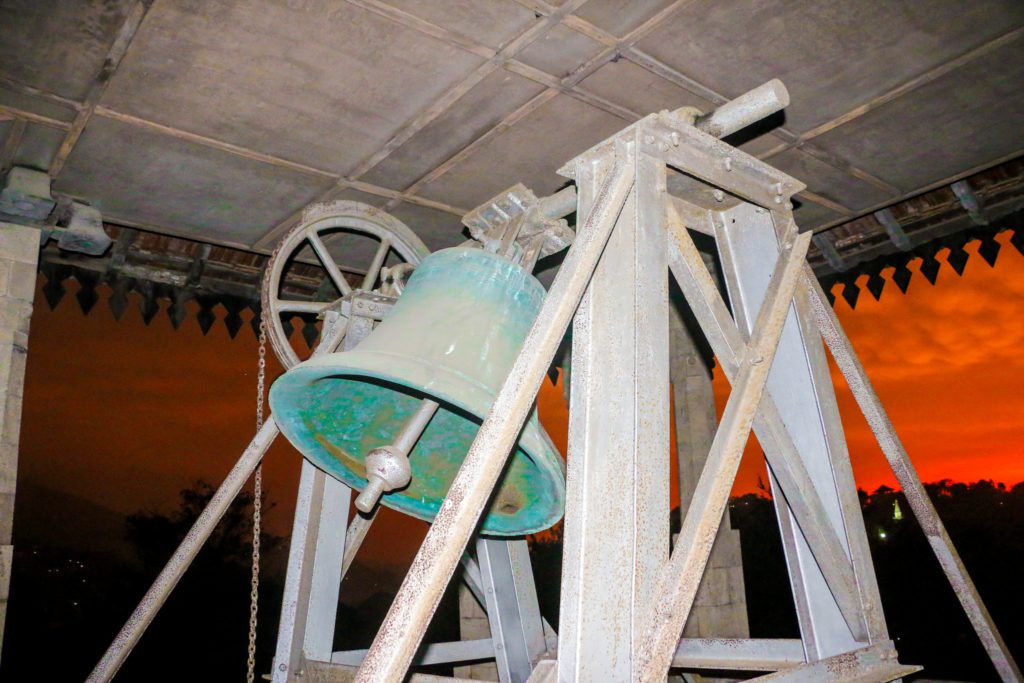 The bell tower having being built in the chapel lacked a church bell which was of grave importance, and so Rev Humphrey Whistler, who was the chaplain during that time told his nephew Rev Humphrey Squire about the College’s need for a bell.

In 1970 Rev Squire visited Hemsby while on a holiday and found three bells on the floor of St. Mary the Virgin parish church which were dated 1660. The vicar told that the bells were never likely to be hung again in Hemsby asked Rev Squire to choose the biggest one of the three which were resting there on the floor. It is said that the parish has given it to us as a ‘missionary present from the people of Hemsby‘.

It is estimated that this bell to be 359 years old. 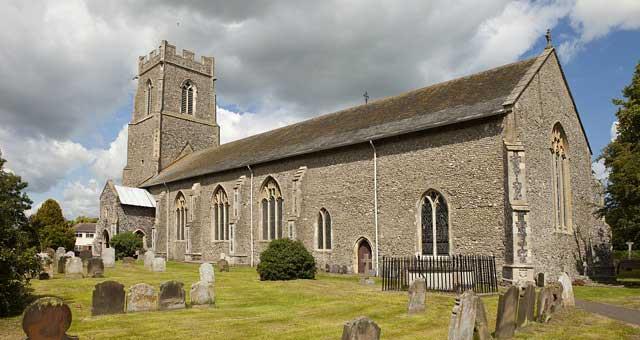 The parish church, dedicated to St. Mary the Virgin, stands proud in the centre of the village of Hemsby. Historically some parts can be dated back to 1660 when the bells were hung. It was restored in the heyday of Victorian fervour when all the seating were installed. The pews are said to have been sawn from one oak tree grown in Filby, with the joinery undertaken in barn rooms.

This church consists of a Chancel, Nave and a South Porch in the perpendicular style with a square embattled tower containing a clock erected in 1870. It is said that originally there were five bells in its belfry which were hung in 1660, the year of the restoration of Charles II. The belfry was removed as it was considered unsafe in the 1920’s,  being eaten up with the beetle, and never rebuilt. One bell was left to strike the hours. Another was sold ,being cracked, and others rested in the Nave, waiting to be restored. We assume it was during this time period Rev Humphrey Squire visited St. Mary the Virgin Parish Church. 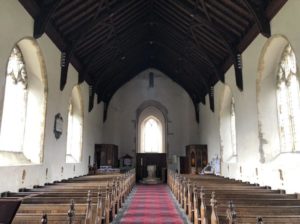 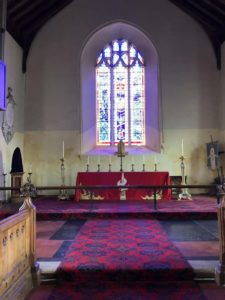 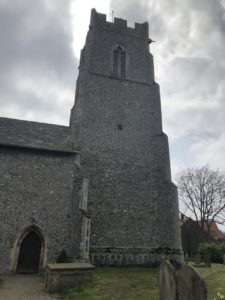 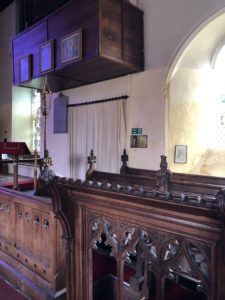 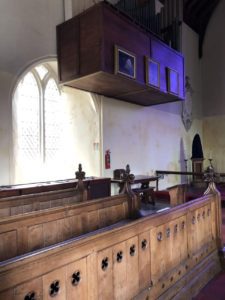 The bell on board SS Mulbera

Having raised the considerable amount of money necessary to obtain a legal faculty and for transport and crafting, the formalities of transferring the ownership of the bell and obtaining the faculty from the Diocese allowing it to be moved took some months. Rev Squire even wrote to the Department of Trade asking if an export license was necessary and was relieved to find it was not.

He got the help of a former Principal of the College, Dr Robert Stopford, who was the Bishop of London, and found a shipping line, The British India Steam Navigation Company (a member of the P&O group), willing to give free freight facilities to take the bell as deck cargo on board SS Mulbera. Rev Squire was able to overcome another hurdle of a 93 pound estimate for the crating of the 7 CWT (355 Kg) bell before it can be accepted by the shipping line. 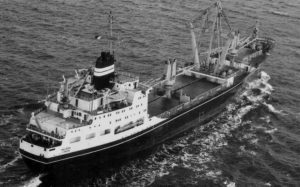 The SS Mulbera (1971) on which the bell was transported on the deck.

It had taken a long time but determined to see that the bell does eventually get to Kandy,  Rev Squire had stated:

‘There is no bell with which to call the Christians worship there and with Sunday a working day in Ceylon his need for a bell is greater than in this ‘Pagan’ country.”

As the records stated below, the British India Steam Navigation Company handled the shipment of the bell: 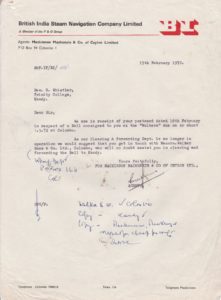 The letter from Bristish India Steam Navigation Company addressed to the Chaplain Rev Whistler regarding the transportation of the bell to Kandy. Dated 19th February 1972

As stated in the letter below, the bell might have arrived in Sri Lanka during March 1972, the same year which our school celebrated its 100th anniversary. 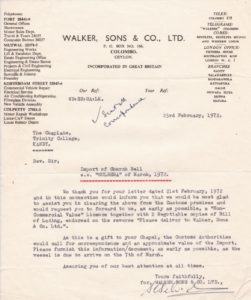 And so, a very generous Old Boy Mr F.N. Schoorman had already paid the very heavy cost of building the tower. It was now with the engineering firm Walker, Sons & Co about to be hoisted – a very complicated job being handled by another devoted Old Boy, Major Ranawake, who planned to have it in place in time to be blessed by the Bishop of Kurunegala during his visit on Trinity Sunday.

However, the bell tower was dedicated as the John Mcleod Campbell Memorial Tower at the Festival of Nine Lessons and Carols in 1969. 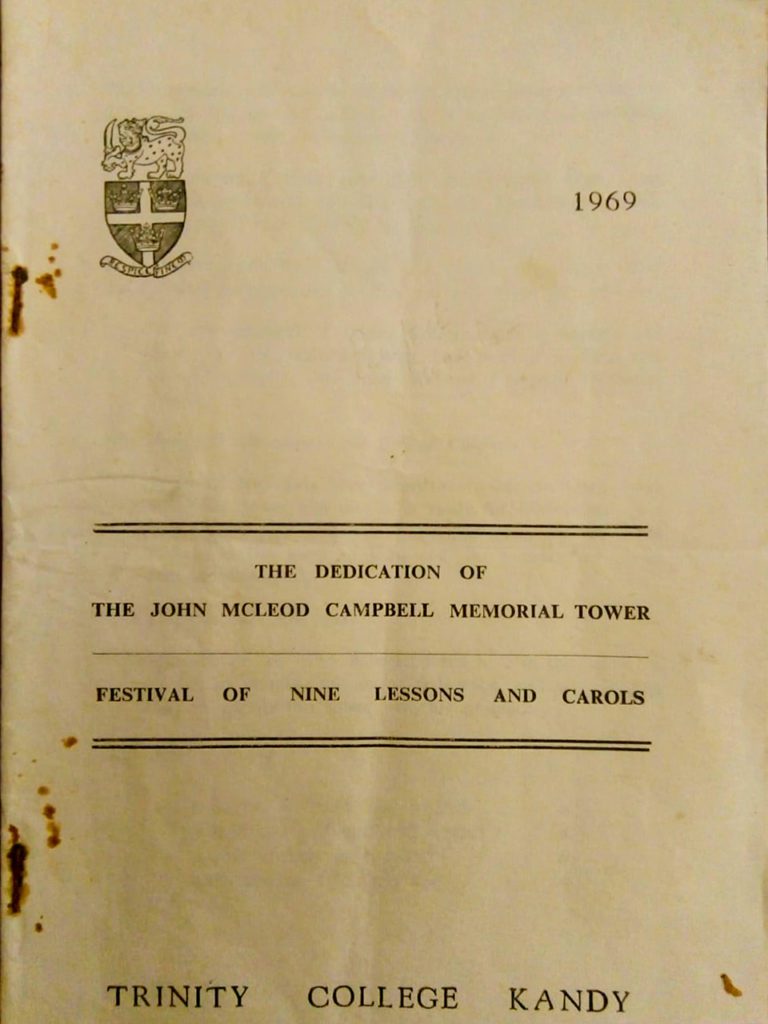 The front cover page of the Carol Service booklet – 1969 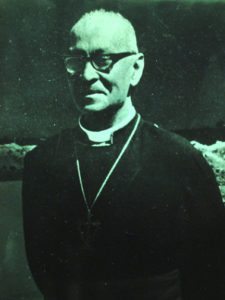 The bell tower was later blessed by the Metropolitan Emeritus, Rev Lakdasa De Mel on August 6th 1972 . To this day it is used in God’s worship.

Following is a recording of the Chapel bell, rung before the start of an evening service:

On a special note:

We thank Mr James Bensley from the Hemsby Beach Cafe for communicating with us (via Instagram) and giving more insight on the Hemsby parish church and the bell.

For those readers who wish to view a larger collection of photographs of the Chapel:

Colour photos of the College Chapel:

Monochrome captures of the College Chapel:

‘A meeting of cultures’ by Ranil Bibile – https://trinitycollege.lk/2019/01/17/a-meeting-of-cultures-the-chapel-of-trinity-college-kandy/

Coats of arms on the pillars –  https://trinitycollege.lk/2017/11/07/coats-of-arms-on-the-pillars-of-the-holy-trinity-chapel/

Building of the Chapel – https://trinitycollege.lk/chapel/building-of-the-chapel/

Services held in the Chapel: 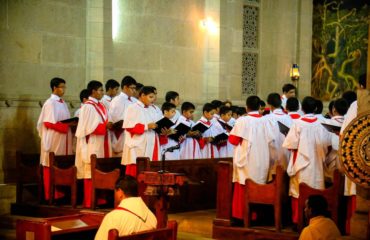 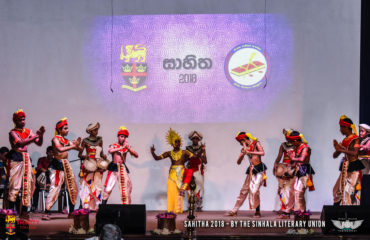 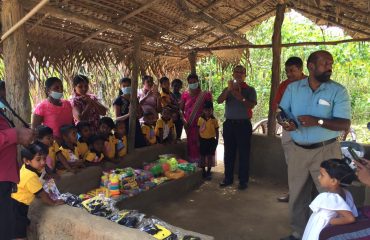