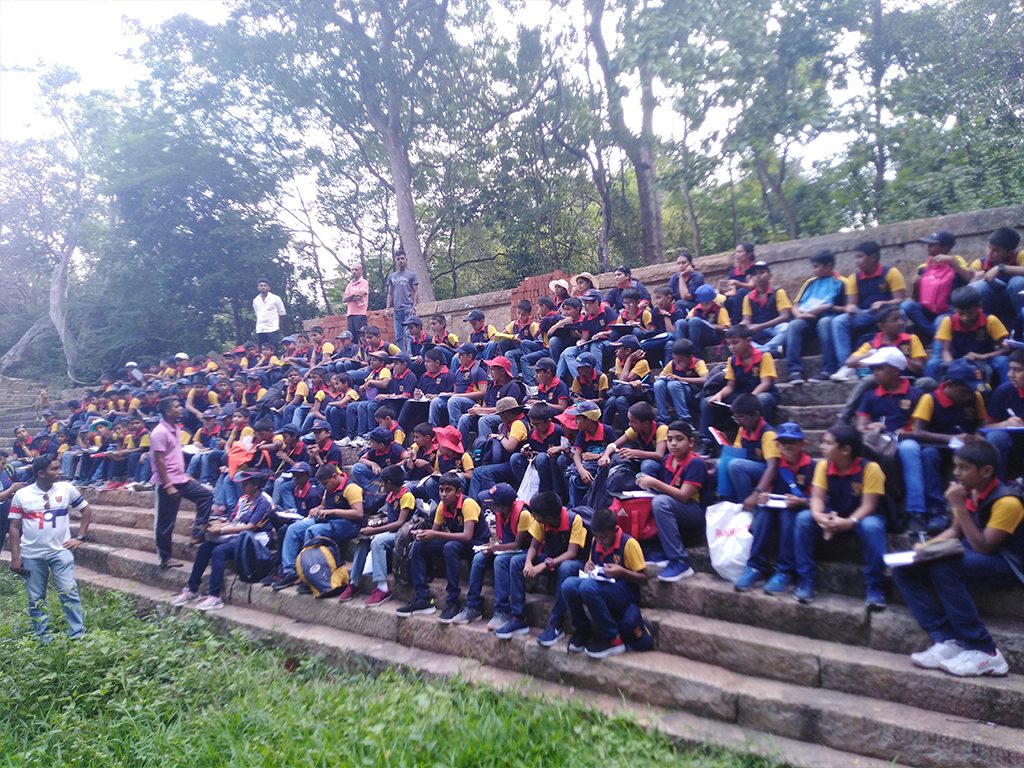 We have two reviews by students who went on this excursion:

On the 28th of February, 2020, the grade 6 students went on an education excursion to Ritigala and the Moragahakanda dam.

We travelled in 4 busses. It was awesome! We played many musical instruments such as the guitar and sang many Sinhala and English songs. We also listened to songs. We were swinging and falling in the bus as the driver went very fast in the curves. We ate a lot of junk food!

We had left the school at 5.50 in the morning and had breakfast on the way.

As soon as we got there we posed for a group photo. Then we were taken through the forest by the guides who were there to teach us.

By around 10am we reached Ritigala in Ganewalpola which is an isolated mountain. Ritigala holds the ‘Banda Pokuna’ which is the largest pokuna in Asia. There are 1200 types of plants at Ritigala and 5 of them can only be found in Ritigala. There is 3500 acres of land. The climate there is cooler in comparison with the hot and dry climate of the region. It is believed that Buddhist monks came here to meditate 100 years ago.

Finally, we went back to the college. We had tea at 4.00 pm and sang songs and watched movies on the way. We reached the school at 8.30 pm where we were handed to our parents.

I really liked this trip very much, but to make it better maybe they could have taken us all the way to the summit of Ritigala. 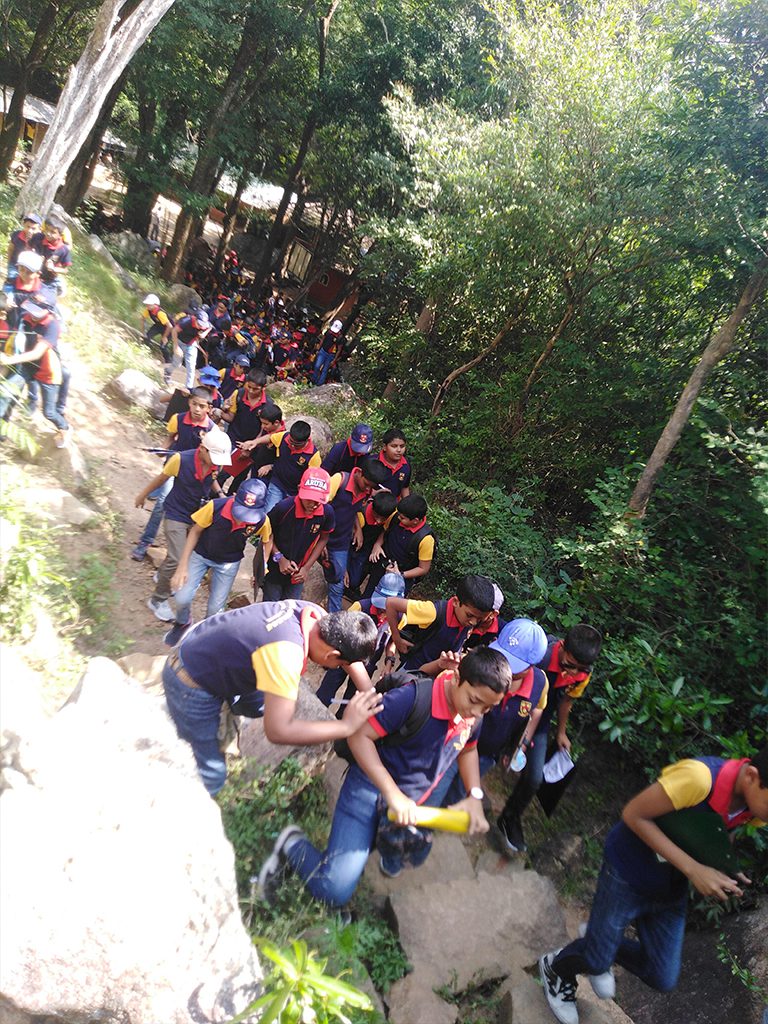 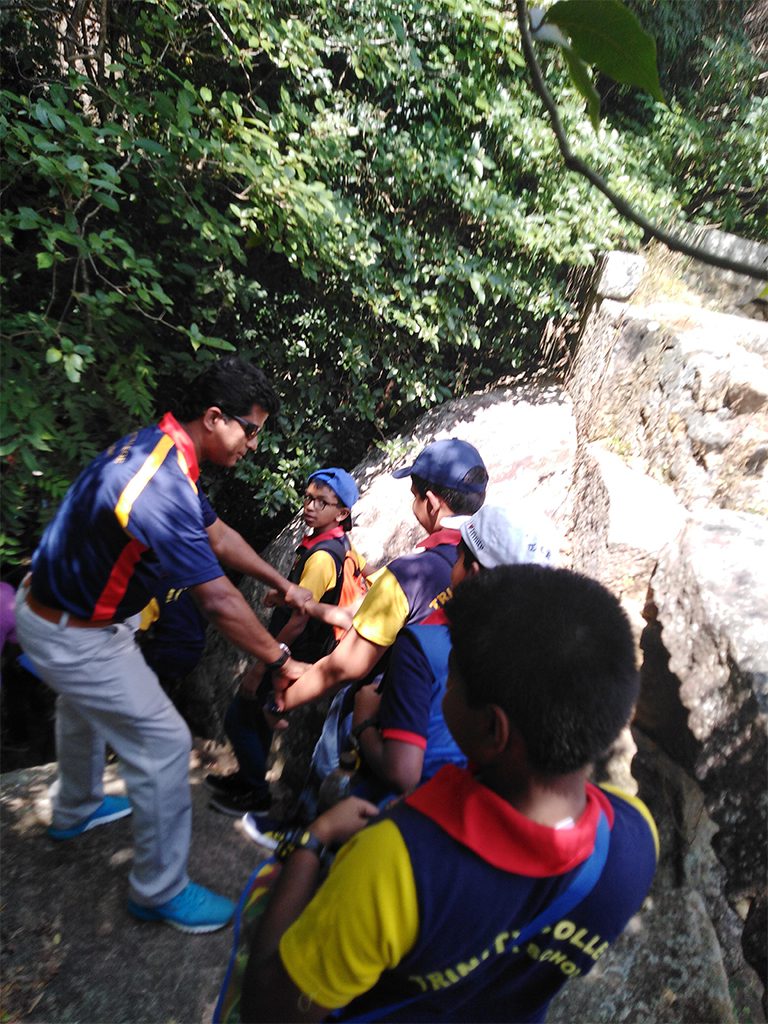 On 28th February 2020, the grade 6 boys of Trinity College went on the most exciting trip they’ve ever been in their school life so far. That is the trip they went to Ritigala and Moragahakanda.

We left school early morning saying goodbye to our parents. We were so excited that as soon as we left the school we started playing drums and singing songs.  When the driver put some pop songs we had to cover our ears with our hands.

A boy had brought some sunglasses that showed different coloured lights which took everybody’s attention!

By 7.00am some of us were standing on seats. We had completely forgotten that teachers will give remarks for our discipline and that the grade head had given a booklet which was to be finished before the end of the trip and it was considered as a monthly test.

Soon, we stopped near a field at Naula. That was the most beautiful scene I have seen,  which we enjoyed while having our breakfast. After having our breakfast we sett of again. We can consider Trinitians as “Pop Music Lovers” as we sang non-stop pop songs.

Finally, we arrived at Ritigala. We first went to a pond which we later on found that it was named as “Banda Pokuna”. According to the guide it was Asia’s biggest pond. It used to cover 2.5 acres. The pond was destroyed by Cholas. Now they are renovating it again.

Next, we walked a long way and came to a place called the hospital where the guide explained us interesting things. The most amazing thing was that at that time when someone was sick they would keep him on a bed that was made of stone.

For a long distance we climbed up Ritigala Mountain which was very tiring. Somehow we climbed up, and got to the next landing which was known as “The Dharmashalawa”, which had an extremely appealing cooling system made by wooden planks laid upon water. With the help of this system it was very easy for monks to meditate.

The most tiring part of the journey was to climb up the steepest part of the mountain. After much struggle we finally made half way through the mountain but security guards didn’t let us pass beyond that due to security measures.

At midway there was an old foundation and Ritigala’s tallest tree.

Afterwards, we climbed down the mountain and returned to our buses at about 11:30am and went near the car park at Ritigala where we stopped to have our lunch. It was 1.30pm when we were provided lunch due to a delay of supplying the food. Our lunch was fried rice with chicken, dhal and vegetable chop suey. Once we had finished our lunch, we set off to Moragahakanda.

By 5pm we arrived at Moragahakanda. At Moragahakanda Dam first we walked to the top of the dam where there was a fabulous view of the blue waters. There was a big hydro-power plant and lot of big buildings. The garden was full of lot of flowers and grass which made it look very beautiful. We spent about an hour at the dam and started back to school.

By about 8:30pm we arrived at school, said goodbye to our friends and went home. That was the best trip I have ever been on.

Some facts about the Moragahakanda Dam

The Moragahakanda Dam officially named as Kulasinghe Reservoir is a large gravity dam across Kaluganga and the Amban River at Matale Construction began on 25 January 2007 and was completed in 2018.

The maiden waters of the dam was released in January 2017. Morgahakanda project is the last of the Mahaveli project. Moragahakanda consists of 2 sites.

The total development cost is Rs. 48.145 billion (US$370 million) and is being carried out by SMEC Holdings and Sinohydro.

A granite Buddha statue built opposite the Moragahakanda reservoir was unveiled on 23 July 2018. The original Moragahakanda tank was first constructed by King Wasaba in 111 AD. 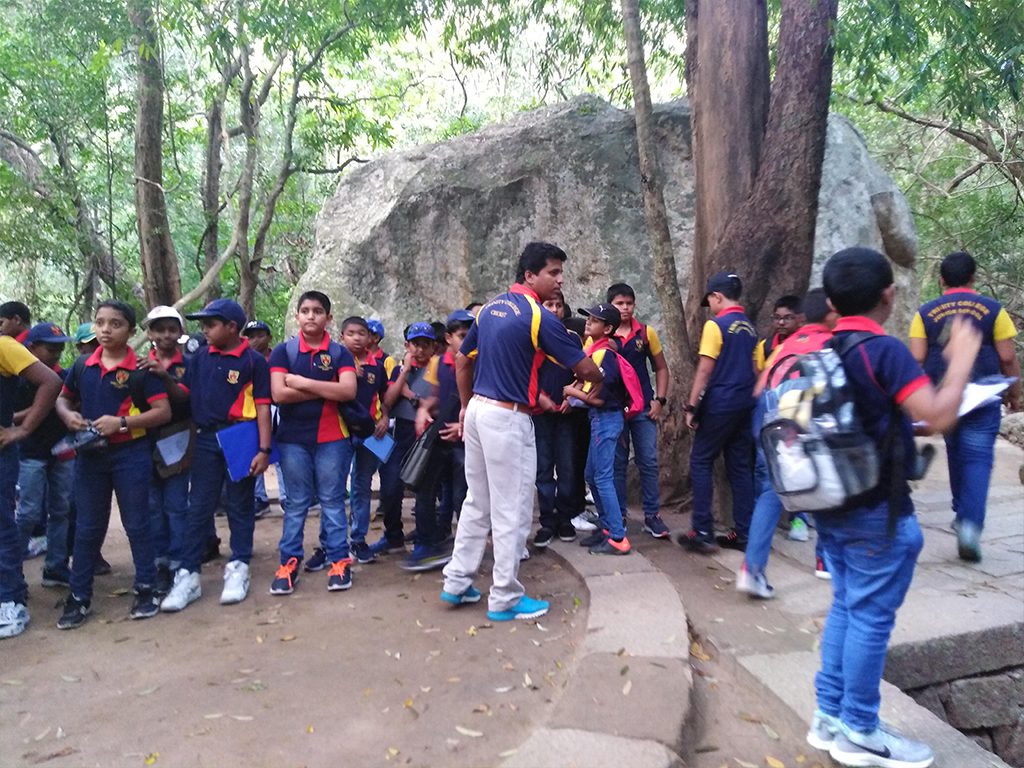 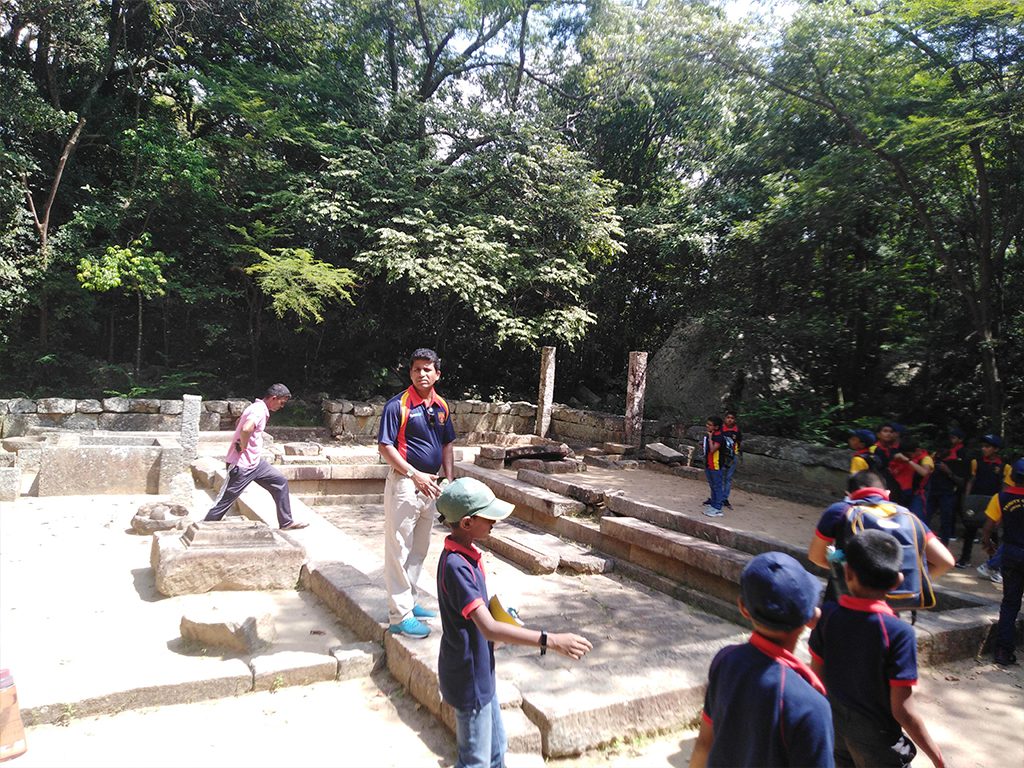 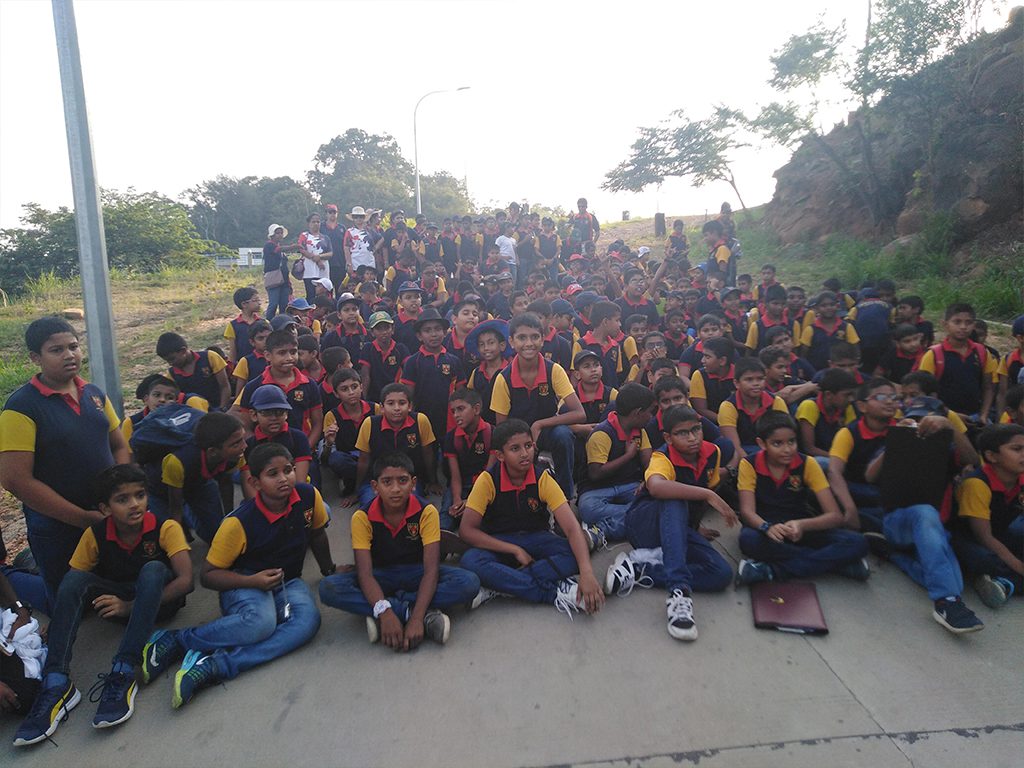 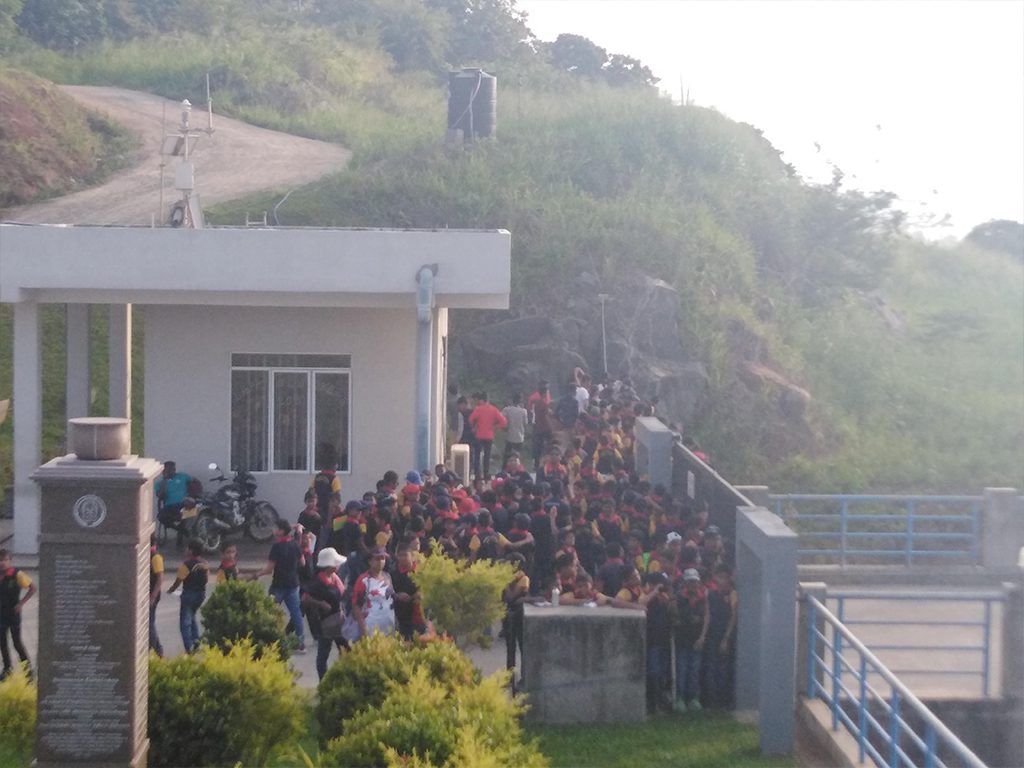 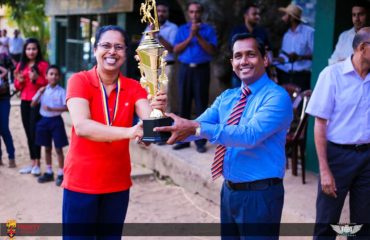 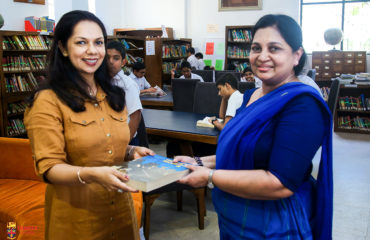 Book donation to the College library by Mrs Amalika Pilimatalauwe 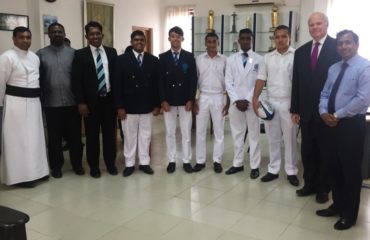 Visit to TCK by the Wesley College delegation