The Library started in 1875, located in the Collins Hall (Senior Class room) originally belonged to the TCK Literary Association.

In 1882 Rev.Garrett the Principal persuaded the Association and made the Library part of the College property. To expand the library Rev.Napier Clavering brought back many books from U.K, in 1898. The Library was moved from the Collins Hall to Rev.Napier Clavering’s room where the Staff met for morning prayers.

In 1913 College Library and the bursary was built and Mr.C.Mendis was the 1st Librarian appointed. In 1914 the government gave half of the expenses (Rs.5000/=) and the Library was furnished.

With the arrival of Mr.Campbell in 1925 with his background as a Don and his desire to create an undergraduate atmosphere in the school he made, and turned his attention to the Library.

A committee was appointed and a competition was held to design a book plate to be used in the library. Budd Jansze (brother of Vernon Jansze, won, and this is continuously used till today.

The Library building had to make way for the hall and temporally housed in the Junior Common room of the Alison Hostel till the Milton Senanayake (Old Boy) Memorial Library was built in 1953, by the Senanayake brothers, (adjoining the Fraser Block) opened in 1955, 11th November and Vernon Jansze (Old Boy) took over the Library in 1955 as the Librarian, sponsored under the Colombo Plan. He followed a course in Librarianship and the Library was completely reorganized.

Now the Senior Library is temporally housed in the College Auditorium. Milton Senanayake Memorial Library is now under repairs, sponsored by the 1996 Batch of Trinity and the floor and windows are done through the College. (Joined Project) 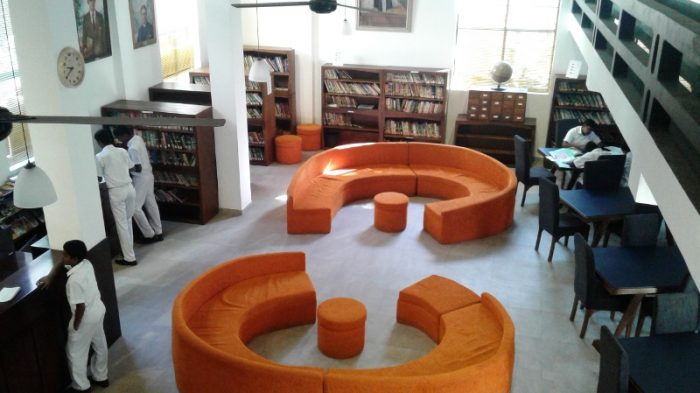