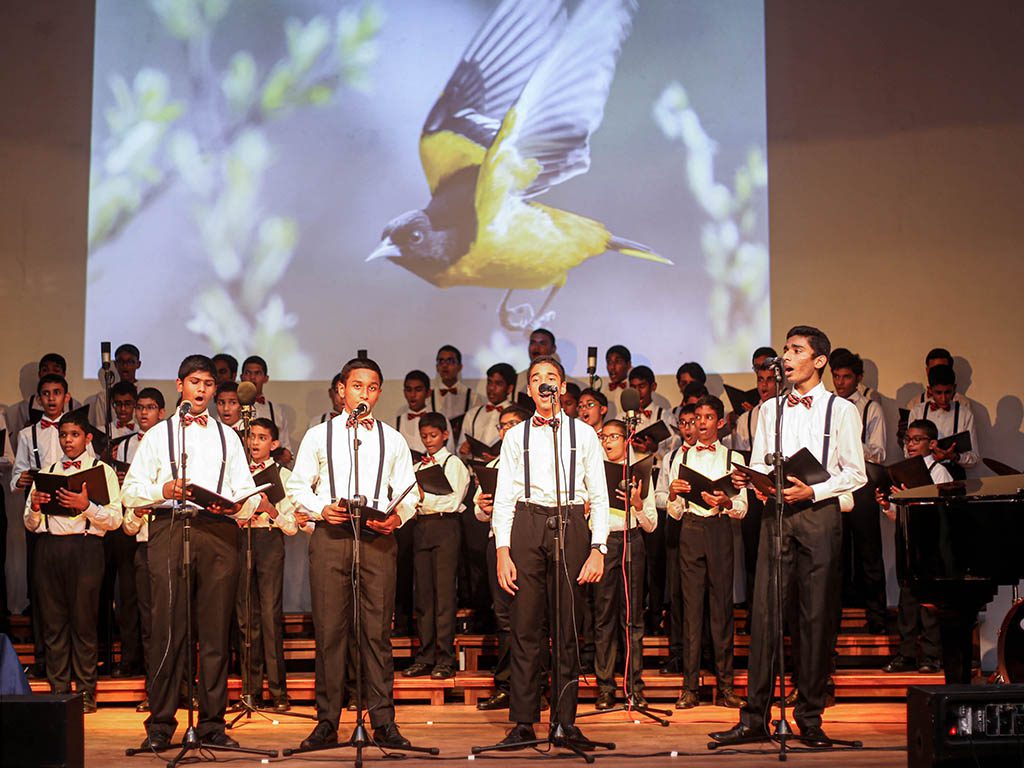 On Saturday the 13th of August, the Trinity College Choir once again took a lucky audience of musicophiles on a musical journey of reminding and minding their music, through time and places.

The Choir of Trinity College, Kandy, staged yet another exclusive and spectacular rendition of its hallmark show, “Mind Your Music” this time under the theme “Jingles to Jazz”. After a three-year interlude, amidst the difficult times, the Choir successfully winded up Mind Your Music 2022 strengthened by the enormous commitment of the Choristers, the Musicians and the Grace of God.

In a cool evening of August breeze, the packed audience in Trinity College main hall eagerly awaited to experience the promise of an entertaining 2 hour at the end of a busy week. The Show, as usual, began with the Mind Your Music Theme, which is an abstract of the theme of the famous British Sitcom “Mind Your language”.

The Choir moved along the theme of the evening, starting from the BBC News Jingle, the well known “Lilibulero” – an SATB arranged by the late Choirmaster, Mr Ronald Thangaiah. The Choir rendered a resembling performance of the original work, awakening the familiar tune in the minds of many.

The 1970 and 1977 Radio Ceylon News Jingles followed next with a special appearance of a Chorister, who is also a member of the Trinity College Drum and Dance Troupe, with a ‘Geta Bera’ to accompany the jingle. The Choirmaster’s amusing explanation of the two Radio Ceylon News Jingles and their association with Sri Lankas’ political history was well received with laughter by the audience.

The Choir performed the Kings Singers’ arrangement of “My Grandfather’s clock”, originally composed by Henry Clay-Work. The Choirmaster made it interesting by inviting the audience to monitor the accuracy of the timing using a clock as the Choir kept to time.

Getting closer to jazz, next choice was an Afro-American spiritual about Moses of Egypt. “Go Down Moses”, arranged by Robert Latham that brought the first strains of jazz progressions perfected by the versatile singing dynamics of the Choir and two soloists, with a light backing by the Jazz drum.

An exciting performance of the theme of “Top Cat”, a much-loved American children’s cartoon, followed next. The Choir sang close harmonies with only the bass line being played on the piano with a touch of drums getting the Choristers and the audience to a swingy mood.

“I’d Like to Teach the World to Sing”, popular as a jingle associated with Coca-Cola was performed next, led by four trebles in the style of the “New Seekers” . The Harmony from the Choir accompanied by the Piano, Jazz Drum, Guitars, and Keyboard led the audience to clap and snap their fingers creating a spirit of joy.

Burt Bacharach is a name that the Choir never leaves out. Next in line was “Raindrops Keep Falling on My Head”. The flamboyant soloist, complete with an umbrella, and the Choir did a justice to the original sung by B. J. Thomas, getting the audience into the rhythm of the evening.

In the vast sphere of jazz, the connection to varieties of pop/rock is inevitable. The Beatles, , another of the Choir’s favourites was represented with a song arranged in Rag Time by Bob Chilcott. A smaller group of Choristers melodiously performed A Cappella the Lennon-McCartney composition “Penny Lane” as sung by the ‘King’s Singers’.

Next was a display of the musicality of the Tenors and Basses (introduced as TTBB Boys). The Tenors and Basses transformed themselves into a Barbershop Style Chorus in the performance of “Sh-Boom”, arranged by Chorister and “Java Jive” by The Manhattan Transfer. The swingy Jazz beats, close harmonies and blending chords created the perfect environment for the intermission with a cup of coffee that followed.

“If lots more of us loved each other, we’d solve lots more problems. And then the world would be a gasser.” As the voice of the Jazz luminary Louis Armstrong echoed through, the robust voice of the bass soloist followed the soothing music of “What a Wonderful World”. The roaring cheers that followed were a reaction to the heartwarming nature of the performance

Next was one of the greatest hits of all time from the 70s and still enjoyed by many, “How Deep is Your Love” by the famous pop-rock band, Bee-Gees. Going by the original format sung by the three Gibbs brothers, the Choir harmonized with a Trio of singers. The diverse audience immediately got toes-a-tapping, joined in clapping, singing and cheering, extending their joyfulness to the Choir.

“Yellow Bird” by Mills Brothers followed next with the winsome and mellow calypso beats from the late 1950s emerging from the congas. The Choir joined the lead Quartet of singers in their tranquillizing voices creating an exotic Caribbean aura.

One does not very quotidianly find the western Choral tradition blending with oriental music. The Trinity College Choir, displaying appreciation and interaction with a diverse music range, sang “Tharuda Nidana Maha Rae” by Nanda Malini in four-part harmony along with a lead of a Trio of singers, emulating the original accompaniment of a unique combination of Congas, Piano, and Guitar.

As the Wind Controller interlude of the next song began playing, the hall filled with synchronized clapping as it was the popular timeless hit “Kingston Town” by the band UB40. Soloist with his mellifluous Alto voice captivated the audience with ease, whilst the Choir efforted in singing and action to bring out the spirit of Reggae.

Then came another spectacular solo performance with the Choir and instrumentation. The jazzy mood of the audience was proliferated with “Blue Moon” by the famous Richard Rodgers, in the style of Rod Stewart, as the Soloist flowingly eased the words. The jazzy sound from the piano and guitar and the coincident sense full moon evening created a truly, mesmerizing ambience.

The culmination of all the Jazz songs in the repertory was the “Dreamer’s Ball”, an ideal of the Rock-Jazz genre, was originally sung by the lead vocalist Freddie Mercury of the eminent 90s British rock band, Queen. The performance was a dance for dreamers. When the choral harmonies supported the voice of soloist, the intense Jazz guitar melodies swung their way upwards for the solo taking everyone’s spirits to the Dreamer’s Ball.

The fitting finale song was a hit from the American Broadway Show, Hamilton. The Soloist rose to prominence in his portrayal of King George III in performing “You’ll be Back” by Lin-Manuel Miranda. The soloist’s showmanship, and dramatizing, along with the tumultuous harmony of the Choir and instruments, dragged the audience to enthrallment. The roaring cheers assured that “They’ll be back” for the next Mind Your Music.

Amidst the undying cheers, the Choir did an encore of “I’d Like to Teach the World to Sing”, a song that reflects the objective of Mind Your Music, which is primarily to create a society with qualitative taste in music in the singing appreciation and interpretation of the wonderful music of the masters.

Mind Your Music 2022 forged a sense of togetherness, bringing together the Choir and the Audience through the universal language of music. It was an evening to remember, where the Choir excelled as always and made it an event to look forward to the next time around.

“The theme and choice of music were excellent” -An Invitee-

“I think this is the most musical event in our school, my fellow colleagues in the Choir did a spectacular job. This will be an event that I’m going to look forward to” -A Student from middle school-

“It’s sad that concerts like Mind Your Music rarely come up in Kandy. Hope the Choir will consider having at least two performances of the show in the future.” -A Well-wisher from Kandy-

“It was an evening our family enjoyed very much. The Choristers were superb as always”. -A Parent-

“I admire the many genres along with the professional level performance quality of the Choir and Musicians.” -A Music Teacher- 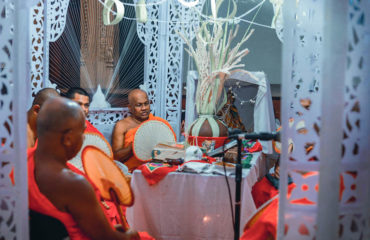 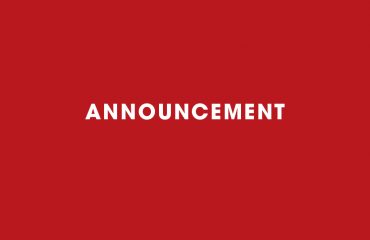