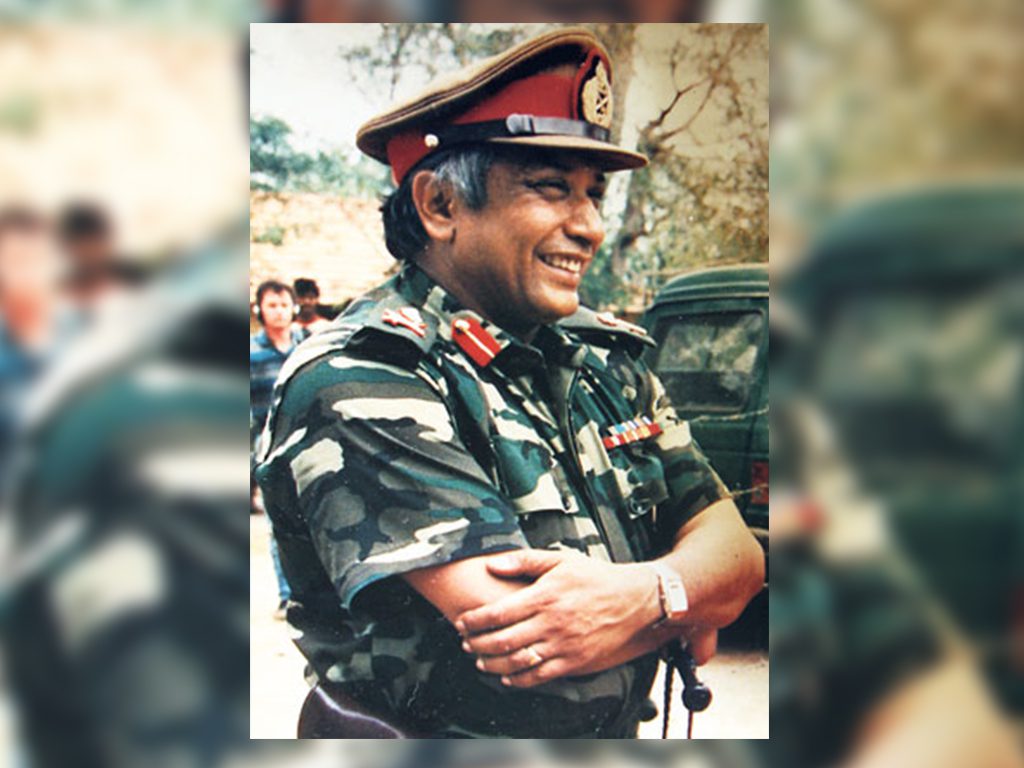 In 1940, on the 27th of July, one of Sri Lanka’s most celebrated war heroes, Denzil Lakshman Kobbekaduwa was born to Loku Bandara and Iona Ratwatte Kobbekaduwa, into a traditional Kandyan family.

Growing up as the second child and the eldest of the three brothers, Kobbekaduwa showed excellence in not only his studies but at a variety of sports during his time at school.

He had his nursery education at Hillwood College, and was admitted to Trinity College in 1948. Even as student he was looked upon by many as a role model as he possessed leadership qualities that were unlike any other.

His contribution to College through sports was unmatched and brought him wide recognition within Trinity. Kobbekaduwa represented Trinity at Rugby, Hockey and Cricket.

This skillful scrum-half went on to lead the Trinity 1st XV Rugby team in 1959. He was the Vice Captain of the Hockey team during the same year as well. That was not all: he was a cricketer and a basketball player too. Kobbekaduwa left College with a Rugby Lion and Colours for Hockey on his blazer.

His excellence was not limited to the sports arena ; he also excelled in his studies. He was appointed a School Prefect in 1960 and was  appointed the Senior Prefect in the same year. This was Kobbekaduwa’s first major leadership appointment, but certainly was not the last.

Stepping Stones of his Military Career

He served as the Senior Prefect for only a week as he chose to pursue a career with the Sri Lanka Army (then called the Royal Ceylon Army), enlisting as an Officer Cadet in 1960 and training at Diyathalawa during his initial three months.

This was followed by a two year officer training program at the Royal Military Academy in Sandhurst, UK along with G. H. De Silva and two other Ceylonese cadets in the Academy’s 29th Intake.

Leaving College to join the Army unfortunately prevented him from qualifying for the Ryde Gold Medal for the Best All-round Boy. He also had to abandon his place at the University of Peradeniya due to his overseas training.

After successfully completing his training, Kobbekaduwa returned to Sri Lanka in 1962 and was commissioned  Second Lieutenant in the 1st Reconnaissance Regiment, Ceylon Armoured Corps.
He never let go of his love for Rugby as he played for the Army Sports Club in the Clifford Cup while he was a part of the Regiment.

His second overseas training course came in 1964 at the Bovington Military Academy in the UK on armoured fighting vehicles. He rejoined his Regiment, Armoured Corps, afterwards.

The upward journey of his Rugby career

1967 was a serious setback to Kobbekaduwa’s career. He was sent on compulsory leave due to an alleged coup d’état attempt in which the Commander of the Ceylon Army, Major General Richard Udugama, was implicated.

However, like a true leader, Kobbekaduwa did not look back and kept on improving. He spent the majority of his time in Kandy during this period, focusing on Rugby and farming. The scrum-half joined the Kandy Sports Club and played a major role in helping the club to build a formidable outfit that would be a threat to all ‘A’ division clubs.

1969 was  a colourful year for him, when he was given the captaincy of the Kandy Sports Club. He also captained the Upcountry Combined Clubs Team.

The biggest achievement of his prolific rugby career was when he received a cap for the All Ceylon Team (Sri Lanka) against the French and British top division clubs. Later he captained, refereed and administered the game on a national level, and acted as a Board Member of the Duncan White Sports Foundation.

Although he achieved success at a rapid pace, he never forgot his roots. He came back to his Alma Mater to coach the Trinity 1st XV outfits in 1968, 1969, and 1970. Under his mentorship these teams flourished, with successes in the Bradby Shield, and in the League Championship.

During his suspension from the Army he met his wife Lalani Ratwatte. She was a tower of strength to him. She was extremely understanding and supportive. They had two daughters Roshani and Shanilka, and a son Dilshan. He was a very caring husband and a loving father to his children and always adored family time.

In 1970, following the General Elections, he was cleared of all charges and was reinstated in the rank of Captain and attached to the Army’s Field Security Detachment, under the command of Lieutenant Colonel Anuruddha Ratwatte.

Based on investigations by the Military Police Unit under his command, Captain Kobbekaduwa warned the Government that a youth insurrection was imminent These warnings materialized when the JVP insurrection started on 5 April 1971, taking the Government and the military unprepared in its scale and magnitude.

After the Insurrection, he was put in charge of the security for Prime Minister Mrs. Sirimavo Bandaranayake and promoted to the rank of Major. While playing an active role in the Army he continued to coach and play rugby for the Army and the Defense Services.

During the latter part of 1974, he was selected to attend the prestigious British Army Staff College Military Academy, Surrey in the UK. Major Kobbekaduwa returned to Sri Lanka to his old Regiment, the Armoured Corps for a few months. Thereafter, he was moved to the Operations Desk at the Army Headquarters in Colombo.

At the Battle Field – Civil War

The change of governments in 1977 resulted in him being suspended once again. However, Major Kobbekaduwa  was reinstated soon after, and was posted to Jaffna to serve in the Task Force for Anti Illicit Immigration (TaFaII).

This Task Force was in place since the early 1960s to counter illegal immigration from India. During his time wilth TaFaII he able to study the terrain of the Jaffna Peninsula. This knowledge benefitted the Army during the onset of the Tamil Militancy that led to the Civil War.

He also served as Principal Staff Officer to Brigadier Tissa Weerathunga. Owing to his tremendous services he was given a promotion yet again, to the rank of Lieutenant Colonel. The very next year he was transferred to the Army Headquarters as the General Staff Officer of G Branch.

In June 1983, Lt. Colonel Kobbekaduwa led his parent regiment as Commanding Officer of the 1st Reconnaissance Regiment. He used his scope of knowledge effectively and deployed his troops and armoured vehicles in Colombo during the Black July riots in July 1983. After being transferred to Vavuniya in 1985, he was promoted up the ranks.

It was evident that the newly appointed Colonel never failed to look after his soldiers. He always made sure that they were in good health and in the best of spirits during the toughest of times. This earned him a huge amount of respect within the Army. This respect didn’t end here as it spread right across the Island.

He also took the front seat in the largest formation deployed by the Sri Lankan Army at the time, and the first conventional battle to take place in the civil war. The objective was to take the territory of Vadamarachchi in the Jaffna peninsula from LTTE  control. This operation was named “Operation Liberation.”

He was promoted to the rank of Major General on his return and appointed as General Officer Commanding 1st Division at the Panagoda Cantonment.

When the Eelam war started in the Eastern Province, Major General Kobbekaduwa was sent as the overall operations commander.

Although he was able to contain the LTTE in the Eastern Province, it was necessary for him to be moved to the Northern Province after it came under heavy attack, and the overall operations command base moved to the Palaly Cantonment in the Jaffna Peninsula.

Known to many military experts as an “Exceptional Third World General,” Major General Kobbekaduwa had a new well-structured offensive to capture the Jaffna Peninsula. It was code named “Operation Final Count Down”.

On August 8, 1992 the group led by Kobbekaduwa headed out on a naval patrol boat towards Jaffna and to the Kayts pier. From there they set out to Araly Point. Heading back, to their grief and the country’s  grief, the Land Rover he travelled in went over a pressure mine.

Two officers, who were 400 yards away, ran towards the location of the explosion to find Major General Kobbekaduwa alive. He was immediately transferred to the Colombo General Hospital by helicopter. Despite the specialist team’s efforts, Sri Lanka lost one of her most loyal soldiers on the 8th of August, 1992. Around 100,000 people attended his military funeral at the Colombo General Cemetery.

Major General Kobbekaduwa’s services to the country waging war against the terrorists to liberate Sri Lanka will not be forgotten. He was universally loved by all his troops and venerated as an honest, compassionate, natural born leader by all citizens throughout our great nation, irrespective of their ethnic differences.
He was seen by the citizens to have the potential to one day be the President of  Sri Lanka. Denzil Kobbekaduwa’s name will be remembered among countless other war heroes who gave up their lives for a better tomorrow. He inspired millions during his life, and millions more even after his death.

The Major General had a prolific career in the Sri Lankan Army for 32 years. The following are the medals he was awarded:

He was posthumously promoted to the rank of Lieutenant General.

It is evident beyond doubt that Lt. General Denzil Kobbekaduwa was atruly inspirational person.. The appreciations below speak for themselves:

“He was an officer and a gentleman of the highest class and fought for our country till the last breath. A great Trinitian.”

“He was made of a fibre that was rare a blend of silk and steel.”

“He was an exemplary leader and warrior.”

“Lt. General Kobbekaduwa was loved by the soldiers and the civilians, both Sinhalese and Tamils.”

Arguably one of the most respected individuals in Sri Lanka in the last century, Lt. General Denzil Kobbekaduwa’s legacy still lingers in the hearts of Trinitians in particular and Sri Lankans in general. His services to his motherland demonstrated how much love and affection he had for it. If we Sri Lankans take inspiration from the late Lt. General’s life, no doubt Sri Lanka would be a shining pearl in the world. 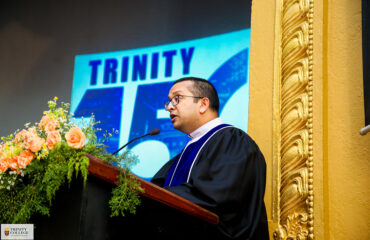 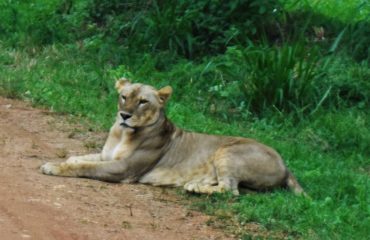 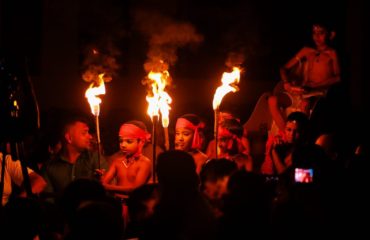